Should you leave negative reviews of your restaurant?

Restaurateurs are known to be wee bit snippy about online reviews. 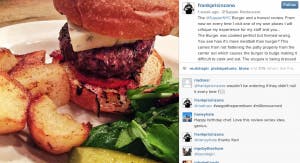 The reply function on Trip Advisor has made for some entertaining back and forth spars, with customers complaining of poor restaurant and hotel experiences.
Just look at the restaurant who fined one couple £100 for describing their hotel as a “rotten stinking hovel.”
It’s somewhat understandable. Restauranteurs pour their heart and soul into their business working 14 hours a day, only for some sniffy customer to go online and say their bread roll was too hard.
Which is why a new stance from New York chef and restaurateur Frank Prisinzano is particularly admirable – he has began to post critical reviews of his own restaurants on Instagram.

Prisinzano leaves what he calls “honest reviews’ on his instagram page every time he dines in one of his four NYC eateries.
Recent snippets include “The pizza was too dry, flat and wafery. WTF??” and “Chicken parm was a hair dry slightly overcooked on the edges because it wasn’t covered in sauce before it went under the broiler” and “ The arugula is being dressed too much and sloppily laid on the plate.”
It’s a bold stance and perhaps PR genius. Prisinzano has gained media attention from the move as well as a reputation as a perfectionist. Customers who dine in his restaurants can rest assured their meals are being adhered to the highest standard.
But what about his poor staff? Mistakes happen, and many Prisinzano points out on his reviews are small ones. Picking on minor niggles from staff who are literally hunched over a hot stove for 10 hours a day can’t be good for morale.
Prisinzano’s response was to emphasise his staff are like his “sons and daughters.” He told firstwefeast.com, “My people have been with me for many many years, most over 10 years. I’m sure they look at this the same way they do when I do it in person—me trying to make us and them better cooks, chefs, waiters, managers etc… I do not rule with fear, I rule with love and constructive criticism. It’s not a public humiliation, it’s us doing what we always do for all to see.”

Which is perhaps why Prisinzano is able to carry out this particular experiment; he has a loyal team of staff who trust his motives.
We always encourage transparency in the restaurant industry; it sure makes a nice change from the defensive Tripadvisor sniping.
But if you do decide to follow post negative reviews of your restaurant, we suggest you follow Prisinzano’s lead and it keep it polite and to the point and make sure your staff know they have their best interests at heart.
Don’t substitute headlines for the support and morale of your team.

Where did that ingredient really come from?

We all know how restaurant design can influence diners ’ eating habits. Now research reported in New Scientist* has uncovered a wealth of information on how much factors such as lighting, windows and the size and shape of a wine glass can affect how much a customer eats and drinks. From visiting 27 ...
Maureen Mckendry
January 26, 2015
Free to get started