We have all had traumatic dining experiences. Meals out so bad we logged online afterwards to leave the most scathing insult of all – a one star review.
The memory of a limp pasta and rude waiter may make you shudder with horror, but according to a report from linguists at Stanford University, diners who left one star restaurant reviews on Yelp adopted the same phrases as actual trauma victims. 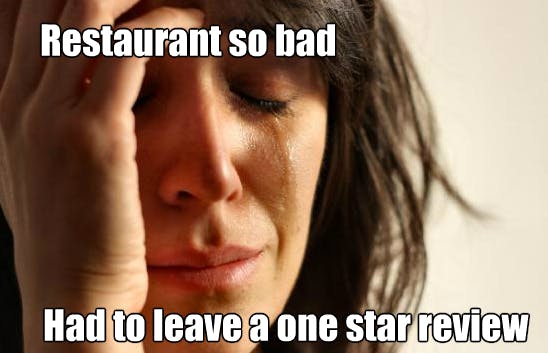 Professor Daniel Jurafsky, who studied the language in nearly a million online reviews of restaurants across the USA, said diners who left one star reviews used the past tense to distance themselves from the event, and terms such as “we” and “us” to share the pain.
He found that disastrous meals out were more often down to poor service than bad food, prompting reviewers to post scathing accounts filled with past tense narratives and first-person plural personal pronouns.
“These are exactly the same characteristics we see in people’s writing after they’ve been traumatised,” Jurafsky told the American Association for the Advancement of Science annual meeting in San Jose. “These people have suffered minor traumas from bad service, rudeness, or being cheated.
“When fans of Princess Diana were writing after her death, or when people were blogging after a campus tragedy, people talked in the past tense to distance themselves from the bad event, and referred to ‘us as a group’ and that ‘we are going to get through it together’,” he explained.

Meanwhile, diners who ate in expensive restaurants littered their reviews with sexual phrases while cheap restaurant reviews referenced drug taking.
“People who liked the expensive restaurants referred to ‘orgasmic pastry’, ‘seductively-seared foie gras’ and even ‘very naughty deep-fried pork belly’,” Jurafsky said, quoting from some of the reviews he studied.
But in cheaper restaurants diners talked of craving, being addicted, and needing a fix of items on the menus. One described garlic noodles as their drug of choice. All manner of food, from chips to cupcakes, was likened to crack.
Junk food, such as pizzas, chips and desserts, drew the most drug references from reviewers. “It’s as if they are feeling guilty, and that talking about the food as a drug, as an addiction, makes them feel less guilty, because they cannot help themselves. It’s like ‘the cupcake made me eat it’,” Jurafsky said.

Back to the one star reviews. Here at simpleERB we firmly believe that as unpleasant as a bad restaurant experience can be, a little bit of trauma can build character and through the bad times you can emerge wiser.
Be strong. We’re here for you.

What is a restaurant uniform? HMRC get their cake and eat it too.

black jeans are uniform but not tax deductible 43 businesses in the hospitality industry featured in the Minimum Wage Blacklist, including names like TGI Friday’s and Marriott Hotels. Around 9,200 workers will receive £1.1m in unpaid wages, and the employers were slapped with £1.3m in penalties. UK...
Ronnie Somerville
March 15, 2018

What to do with leftovers?

Happy Thanksgiving to all of our American readers! We hope you are suitably rested after yesterdays festivities and are avoiding Black Friday as much as you can. If you’re anything like us then you’ll be feasting on cold leftovers today. In fact, we’re of the opinion that the leftovers might be the ...
Phil Smith
November 25, 2016
Free to get started