How music, movies and friends influence the taste of your food

Every wondered why Coke tastes better from a glass bottle than a plastic bottle? Why a neat swirl of spaghetti is more delicious than a heap dumped on your plate? Turns out it’s science. Gastrophysics if you want to use the fancy word. 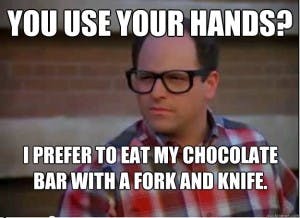 The term has been coined by Oxford experimental psychologist Charles Spence who has researched in detail how all of the senses (even hearing) as well as mood and expectations influence the taste of food.
His book, The Recent Meal, has uncovered some interesting insights as how outside influences affect the taste of our food. Here’s a few of the best examples.

Fancy restaurants know what they are doing

If we pay more for a wine we think it’s more delicious. Heavy cultery implies quality (for example, yoghurt will be perceived as creamier). Classical music in the background encourages diners to choose more expensive options while loud music increases soft drink sales.

Sad movies may make you fat

Professor Brian Wansink from Cornell University found that viewers of sad movie Solaris munched 55% more popcorn than those who watched My Big Fat Greek Wedding. Eating in front of the tv also encourages you to eat more as you don’t realise when you are full.

Eating with friends may also make you fat

We eat 35% more when with one other person, 75% more with three others and twice as much when there are seven or more diners. Variety also encourages overeating. A bowl of mixed M&Ms will be eaten quicker than a bowl of just one colour.

People eat less from red plates and blue lighting has also been shown to discourage overeating. Charles Spence also tricked wine experts into reviewing a white wine with red food colouring as a red wine, even when the 54-strong panel had already reviewed the wine in its original white form.
Wine also tasted 50% sweeter when consumed under a red light. The reason? Our eyes are our most influential sense, with vision taking up the most brain space, and so the expectation implanted in our minds by colour can overrule the taste and aroma put together.

The diner who orders first tends to enjoy their food or drink more. Those who follow often instinctively dismiss what others have ordered (there’s a psychological phenomenon called the “need for uniqueness”) and end up picking something they wouldn’t ordinarily chose.

So how to we react to this information? Despair at the fact we are all easily influenced dupes? Or accept that outside influences such as presentation, company, music and even the colour of the plate are as much of a part of the eating experience as the food itself? We’re plumping for the latter. Just don’t tell that to the wine critics.

What is a restaurant uniform? HMRC get their cake and eat it too.

black jeans are uniform but not tax deductible 43 businesses in the hospitality industry featured in the Minimum Wage Blacklist, including names like TGI Friday’s and Marriott Hotels. Around 9,200 workers will receive £1.1m in unpaid wages, and the employers were slapped with £1.3m in penalties. UK...
Ronnie Somerville
March 15, 2018

What to do with leftovers?

Happy Thanksgiving to all of our American readers! We hope you are suitably rested after yesterdays festivities and are avoiding Black Friday as much as you can. If you’re anything like us then you’ll be feasting on cold leftovers today. In fact, we’re of the opinion that the leftovers might be the ...
Phil Smith
November 25, 2016
Free to get started