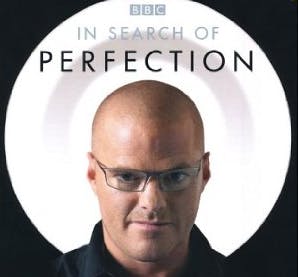 (Heston Blumenthal is a British chef with 3 Michelin stars and a perfect 10/10 from The Good Food Guide  for his restaurant The Fat Duck.)

When he announced plans to open a restaurant in Heathrow’s new Terminal 2, it was widely reported to be a casual cafe serving British fast food favourites.

Which technically is the truth. However, a new article has revealed the scope and attention to detail behind the Perfectionists’ Café, due to open with the new terminal in June 2014.

A pizza oven shipped from Naples, fifty different fish batter mixes, five months perfecting a burger bun and prototypes of staff uniforms, are just some of the examples of the amount of research that has gone into developing Heston’s new venture.

The concept is a restaurant which promises to offer customers “perfect” versions of popular dishes – the perfect pizza, the perfect burger and the perfect fish and chips, in a similar theme to Heston’s 2006 cookbook, In Search Of Perfection.

“We wanted to strip every dish back as far as we could and understand what makes it perfect,” said Ashley Palmer-Watts, group executive chef of Heston Blumenthal’s restaurants, in an interview with Caterer and Hotelkeeper.

“The book represents a massive amount of work by a lot of people but we just used it as a starting point. That is how much we want to get this right.”

The result was a staggering amount of research, which included Palmer-Watts, along with head chef Julian O’Neill, taking a trip across Naples to consume 15 pizzas each in the space of two days in their quest to create the perfect pizza.

The perfect fish and chips research involved the aforementioned fifty batter mixes, the consumption of fifty whole fish and the decision to run the batter through an espuma gun to create thousands of air bubbles which expand when they hit the oil in order to protect the flesh of the fish.

The perfect burger was determined to include brisket, rib cap and chuck served with iceberg lettuce, onion, cornichon, a sauce made from ketchup, mayonnaise and mustard and served with a bun made with whipped cream and butter. According to the restaurant, a person’s bite is the size of their middle three fingers so the perfect burger is no thicker than this when squashed together.

The twist on all this painstaking work? The dishes will be served in the 125 seat restaurant by the typically perfect time people want to eat, within 10 minutes, at accessible prices, with pizzas starting at £9 and fish and chips £14.

“The amount of work and research that has done into this is perhaps, commercially speaking, not the best way of going about things,” Palmer-Watts told the magazine. ‘But the results will be perfect.”

Is he setting himself up for a fall with these bold claims?