It’s easy to understand why restaurateurs are wary of an open kitchen.
Every move from their chefs are exposed, available to be scrutinised by the waiting diners who are paying to eat the food. 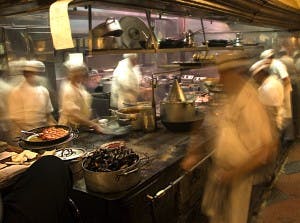 This means no chatting, no checking of mobiles, and certainly no dropping the ingredients and slyly putting it back on to the plate (not that we’re saying any of your staff would do such a thing).
However, a recent survey from students at Harvard Business School and University College London revealed customers rate their food higher when they can see it being prepared.
Surveillance
The surveillants used ipads and video conferencing between the dining area and the kitchen to set up four different viewing scenarios in a real cafeteria within a two week period.
In the first scenario diners and cooks couldn’t view one another; in the second, the diners could see the cooks; in the third, the cooks could see the diners; and in the fourth, both the diners and the cooks were visible to one another.
The results were compelling. Customer satisfaction with the food shot up 10% when the cooks could see the customers, even though the customers couldn’t see the cooks. In the opposite situation, there was no improvement in satisfaction from the baseline condition in which neither group could see the other. But even more striking, when customers and cooks both could see one another, satisfaction went up 17.3%, and service was 13.2% faster.
It appeared transparency between customers and providers appeared to significantly improve service.
Human connection
However, according to Tami Kim, a doctoral student at Harvard Business School, this was less to do with chefs being kept an eye on and more to do with them feeling valued.
We found that reciprocity plays a much bigger role than stress or accountability,” Kim said. “This is more about gratitude—which is a powerful force. Cooks constantly said how much they loved seeing their customers. Many wanted to keep the iPad setup. One said, “When the customers can see the work, they appreciate it, and it makes me want to improve.””
Ryan W. Buell, an assistant professor at Harvard Business School, added “Being appreciated makes work meaningful. People feel what they do matters. Human connections seem to trigger that.”
Motivation
It certainly makes sense for chefs who spend all day slaving over a hot stove being able to see their work appreciated.
During the experiment, chefs who usually grilled their eggs in advance adding them to plates as needed, often overcooked, began to make them to order when they saw the customers on the screen watching them.
Just seeing the customers motivated them to do better.
“What’s exciting is that these are often subtle alterations,” Chia-Jung Tsay, an assistant professor at University College London, said. “It’s not expensive or difficult to create transparency between consumers and producers. Just by opening up the work environment, you could improve value and quality. Transparency becomes a low-cost strategic advantage.”
Words to consider when you plan your next kitchen redesign.