New York raw fish fans you have approximately two weeks to gobble as much fresh sushi and sashimi as you can handle – from August, new regulations mean all fish served raw must be frozen first, reports The New York Times. 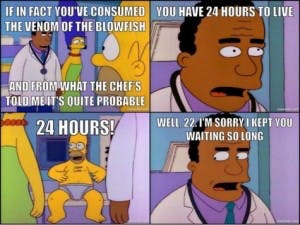 The regulation, published this week by the New York City Department of Health and Mental Hygiene, requires that fresh raw fish served in restaurants must first be frozen to guard against parasites.

This news may horrify New York gastronomes, but the truth is, many chefs in the city’s top restaurants have long used frozen fish for the exact reason above.

Even the New York City chapter of the New York State Restaurant Association, which had complained about the regulations at a health department hearing in January, has reversed course.

James W. Versocki, a legal counselor for the group, noted that the vast majority of fish is already flash frozen at some point in the supply chain. “By all indications, everyone will be enjoying the same quality of sushi,” he said.

The Health Department regulation stipulates that fish will require a minimum freezer storage time of anywhere from 15 hours to one week, depending on the temperatures used in the freezing and storage process.

Several types of seafood are exempt from the rule, including shellfish, farm-raised fish and certain types of tuna.

National health agencies do not regularly track the cases of illnesses caused by eating raw fish, said Dr. Susan Montgomery, an epidemiologist at the Centers for Disease Control and Prevention, adding, “These infections are rare in the United States and generally aren’t fatal.”

Still, the city’s health department believes it cannot be too careful. Beginning in 2016, restaurants will have to put in print that raw and undercooked foods can be hazardous to one’s health.

For most restaurants, Mr. Versocki said, “the only change might be a new menu.”