A world with no restaurant tipping?

There are few acts as culturally divisive than restaurant tipping. In the UK 10% is considered good manners (if the service is good). In the USA anything less than 20% is unacceptable. In Japan tips are not left at all and the server may even try to return your tip if you choose to leave one. 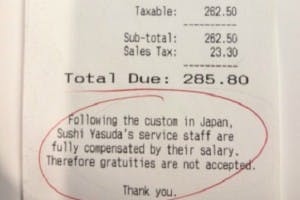 Dining in a foreign country often includes a mild panic at the end of the meal and a scramble for the Lonely Planet to check you are tipping in adherence to local expectations. However, one prominent New York restaurateur intends to do away with this awkward scenario….by banning tipping around the world.

Okay, that’s an exaggeration. But when one of the most influential restaurant figures in the world, a man who banned smoking in his restaurants over a decade before it became the law, announces he plans to ban tipping in his thirteen NYC restaurants, it’s fair to assume this will have a ripple effect.

Danny Meyer, Chief Executive of Union Square Hospitality Group, the force behind some of New York’s most important restaurants, announced that starting in November he will eliminate tips at every one of its thirteen restaurants as well as increase prices.

In a letter on the Union Square Hospitality Group website he said: “We believe hospitality is a team sport, and that it takes an entire team to provide you with the experiences you have come to expect from us. Unfortunately, many of our colleagues — our cooks, reservationists, and dishwashers to name a few — aren’t able to share in our guests’ generosity, even though their contributions are just as vital to the outcome of your experience at one of our restaurants.”

Meyer plans to increase his menu prices 30-35%, the extra cost ensuring a fair wage for all restaurant staff not just the waiting staff, eliminating a scenario where the waiters earn a higher salary than the chefs.

All great for the staff. But how will diners feel about having the tipping practice taken away from them?

There’s the practical aspect of the hike in dish prices: it remains to be seen how diners react to paying £39.10 instead of $29 for Maialino’s famed Devil’s Chicken, even without the tip.

But there’s also the psychological factor. As Meyer himself told New York Eater, the diner may think “I no longer believe I have a sword to punish a waiter with, or a pat on the back to praise with.”

His solution is a system such as Uber that introduced a culture of both tip-free payments and open customer feedback an an industry not used to either.

An online feedback system, he points out, “would give us all kinds of data. Today, if you leave a bad tip, I probably don’t even know about it.” But with mobile payments and experience-specific feedback, “I can follow up and say ‘Help us get better,’ or ‘Let me refund some of your money.’”

Well what do you know. Who already offers an online restaurant feedback system? simpleERB.

simpleERb allows diners to comment and give ratings on their meal, feedback which goes directly to the restaurant.

So if the restaurant world does indeed become tip free, you won’t be unaware as to whether your customer enjoyed their meal.

You’ll see their opinion for yourself on simpleERB.